Sometimes when I am in the middle of writing a book, I get stuck and don’t know how to continue.  I ask my characters questions and let their answers give me direction.  Now I am going to interview myself.


When did you decide to become a writer?

Before I became a writer, I was a reader.  Sesame Street and other programs that teach young children to read had not yet been invented. (But the television was around – hey, I’m not that ancient).  On my first day in the first grade, Mrs. Siegel showed us an enormous book about Dick and Jane.  It was at least two feet tall.  We all sat on the floor looking at the pictures.  When she began to read, I discovered that I could read the words along with her.  I didn’t need to learn to read.  I could already read!

This is a mystery to me.  But I began reading every book I could find.  The children’s room in the basement of the old Rockville Centre public library was my favorite place in the whole world.  I read before I went to school and the moment I came home.  To this day I will read the information on the cereal box for the twentieth time just to have something to read.

I asked you when you decided to become a writer, not a reader.

Excuse me.  I told you this little story because I believe that in order to be a good writer, you have to love to read. 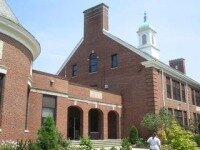 When I was in elementary school, I wrote stories and poems.  I remember reading a long poem about Teddy Roosevelt and the charge up San Juan Hill over the loud speaker.  My teachers seemed to think that reading one’s poems to the entire school was a form of encouragement.  But I was very shy and hated it.  There were a lot of things I hated about school.  Maybe I’ll write a book about that some day.

My favorite subject in school was language arts.  Later at Oberlin College I majored in English and American literature.  After college I wrote short stories and poems.  But when my first son, Erez, was born, I realized that what I really wanted to do was write for children.  So I began.

That’s when you became a writer? 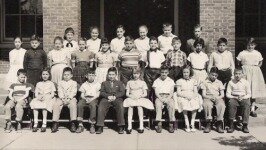 First or Second Grade Class Photo. Me, second from left. Girls were required to wear dresses. I hate dresses to this day.

I guess you could say so.  But I never
thought of myself as a writer.  Writing was something I did when I could make the time for it.  I was a wife, a mother, an M.A. student, a waitress, a housemother, a secretary, a copywriter, an events planner, a fund raiser and probably some other stuff I’ve forgotten.  When I published my first picture book, I didn’t think of myself as a writer.  “You’re just a flash in the pan,” I told myself encouragingly.  Even when I published three more books, I never called myself a writer.  Maybe because writing was something I had to fit into the margins of my life.

Do you call yourself a writer now?

Yes.  I feel like the publication of Double Crossing made me a writer.  For the first time I decided to take myself seriously.  I decided to make writing a central part of my life and not something I did on weekends or early in the morning.

How long did it take you to write Double Crossing?

No, seriously,  Double Crossing is the first book I’ve published in English, but I have a whole bunch of books that have never been published.  Until a book is published, it's called a manuscript.  I have so many manuscripts that I have lost count.  But all of them were practice for writing Double Crossing.

So why did it take you so long to publish a book in English?  Aren’t you a good enough writer?

That’s the question I’ve been asking myself for years. I have answers, but they sound like excuses:  Living abroad.  Not making enough time to write.  Not knowing how to market myself. Not knowing the right people.  Not being lucky.  Writing books that just weren’t good enough.

Perhaps all of the above…?

How did you finally get published? 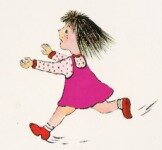 I like to think that I made my own luck.  I joined the Society for Children’s Book Writers and Illustrators.  I went to a SCBWI conference.  I met and talked with many nice people.  I discovered that children’s literature was now taken seriously as an academic discipline.  Eventually I made the decision to attend Hollins University in Roanoke VA to study children’s literature.  For three summers I left my family and job and studied at Hollins.  I learned an enormous amount about children’s literature and literature in general, met wonderful people, and took classes in creative writing that helped me to improve Double Crossing. (Thank you to everyone in Alexandria LaFaye’s creative writing class, and particularly to Alex, who has written some terrific books and helped me greatly).

Then I attended a conference of the Children’s Literature Association in El Paso TX.  Because I had never been to El Paso or Texas, I came a few days early to explore. Strolling downtown one afternoon, I noticed the bright covers of children’s books in a window, so I walked in.  This turned out to be the bookstore of Cinco Puntos where I began talking with Lee Byrd, co-founder and editor.  At the conference I met Bobby Byrd, the other founder.  He invited me to submit some of my work.  Months later Lee e-mailed me that they wanted to publish Double Crossing.  My cries of joy vibrated around the Mediterranean and still echo through the Straits of Gibraltar.

So call it luck.  But it’s luck that I made through hard work.

What would you say to someone who wants to be a writer?

Write.  Don’t talk about it.  Do it.  And then rewrite.  Find people who can provide insightful criticism.  Rewrite. And then submit.  But most important, don’t give up.  Stubbornness is a writer’s most important trait.  Or if you want to be fancy, call it dedication.